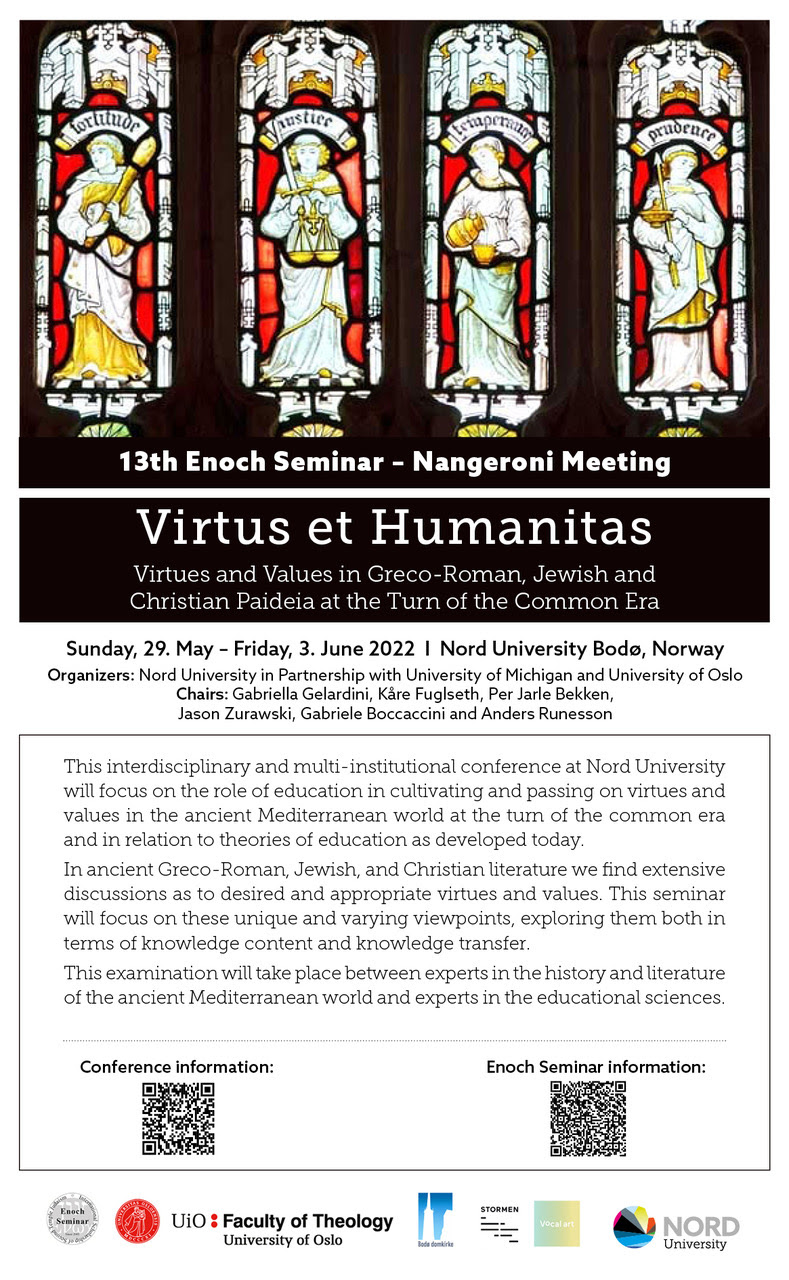 ~ 13th Nangeroni Meeting ~ Virtus et Humanitas: Virtues and Values in Greco-Roman, Jewish, and Christian Paideia at the Turn of the Common Era DATES: Sunday, 29 May– Friday, 3 June 2022 LOCATION: Nord University, Bodø, Norway CHAIRS: Gabriella Gelardini, Jason Zurawski, Gabriele Boccaccini This interdisciplinary and multi-institutional conference at the Nord University will focus on the role of education in cultivating and passing on virtues and values in the ancient Mediterranean world at the turn of the common area. While much has been written about education in antiquity, very little of it has been devoted to this crucial aspect of education. This is astonishing, given the fact that the transmission of values has always played a fundamental role in education, from antiquity to the present. Values are often understood as drafts for the execution of a good life, which then take shape in guidelines or certain norms. In turn, these norms shape and support the relationship one has not only to oneself but also to one’s fellow human beings and to the gods. Values hold societies and epochs together, but they are also culturally and contextually bound. In ancient Greco-Roman, Jewish, and Christian literature we find extensive discussions as to desired and appropriate virtues and values. This seminar will focus on these unique and varying viewpoints, exploring them both in terms of knowledge content and knowledge transfer. This examination will take place within the framework of an interdisciplinary discussion between experts in the history and literature of the ancient Mediterranean world and experts in the educational sciences. Therefore, in our seminar we will begin by working from the primary source materials, presenting a value (or values) found in an ancient text and attempting to understand it contextually. We will then detach it from its literary-historical context and look at it conceptually or comparatively against the background of ancient and/or current theories of education. Visit the conference webpage for more information, including a schedule of presentations with abstracts. 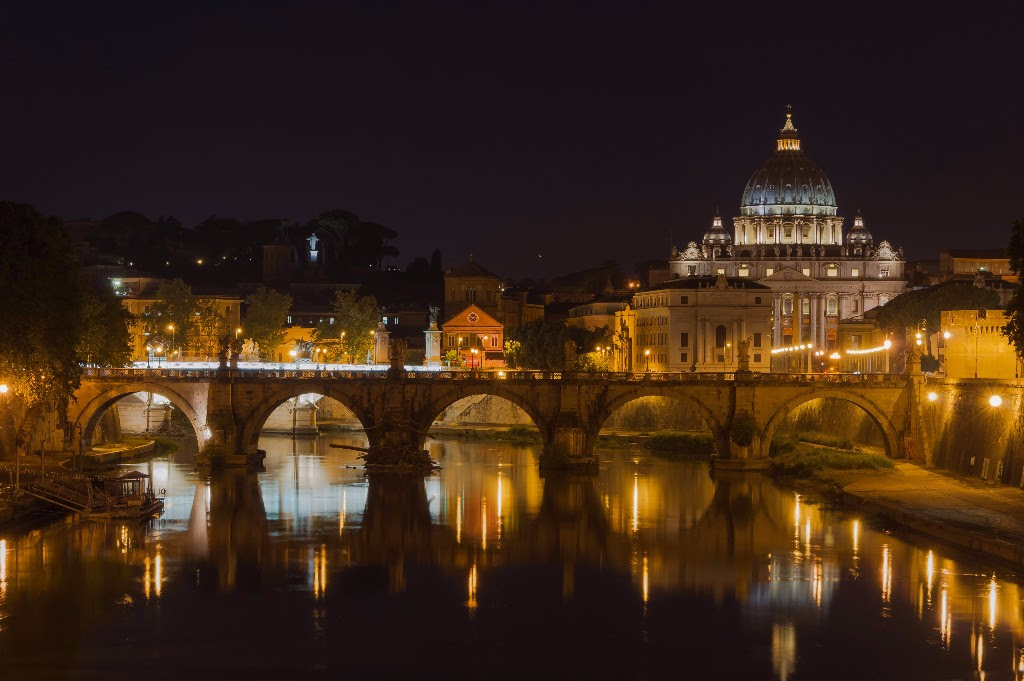 ~ 14th Nangeroni Meeting ~ Luke and Acts with(in) Second Temple Judaism   DATES: 26-29 June 2022 LOCATION: Rome, Italy CHAIRS: Isaac W. de Oliveira/Oliver and Jocelyn McWhirter CO-CHAIRS: Gabriele Boccaccini and Eric Noffke SECRETARY: Joshua Scott The Gospel of Luke and the Acts of the Apostles are nearly always attributed to a single gentile author writing for a gentile audience. Many studies thus concentrate on how Luke and Acts as gentile Christian texts relate to Hellenistic culture or the Roman Empire, with little to no consideration to their ancient Jewish context. Attention to Luke and/or Acts in relation to Judaism is often limited and tends to focus on either the author’s familiarity with Jewish scripture and tradition or the author’s perspective on Torah obedience for gentile followers of Jesus. Even then, scholars assume that “Luke,” as one of the first writers to designate Jesus’ followers as “Christian” (Acts 11:26; 26:28), situates Christianity outside of Judaism. This meeting seeks to situate Luke and Acts with(in) Second Temple Judaism. Can we make a case that Luke and Acts were written by a Jew (or Jews) for an audience that included Jews? If so, what kind of a Jew was the author? A “Hellenistic Jew”? A gentile proselyte? In which kinds of Jewish settings and intellectual traditions can the writings of Luke and Acts be effectively appreciated (apocalyptic, diasporan, sectarian, synagogal, etc.)? How might we relate Luke and Acts not only to Second Temple Jewish works such as the Septuagint, 1 Enoch, and the Dead Sea Scrolls but also to post-70 Jewish works such as 2 Baruch, 4 Ezra, or the writings of Josephus? What can we say about the Jewishness of Torah interpretation, messianism, eschatology, and other relevant topics in Luke and Acts? How do Luke and Acts relate to Paul’s letters, Matthew’s Gospel, and other early Christian writings as they concern Judaism and Jews, including Jewish followers of Jesus? Finally, how might Luke and Acts be appreciated within their Greco-Roman environment in light of their Jewish heritage and possibly even as ancient Jewish texts? This conference will investigate these questions and others under the conviction that they are equally relevant for comprehending Luke and Acts as they are for Paul, Matthew, and other figures and writings of the Jesus movement whose Jewishness has been reclaimed in recent times. Visit the conference webpage for more information, including a provisional schedule of speakers. 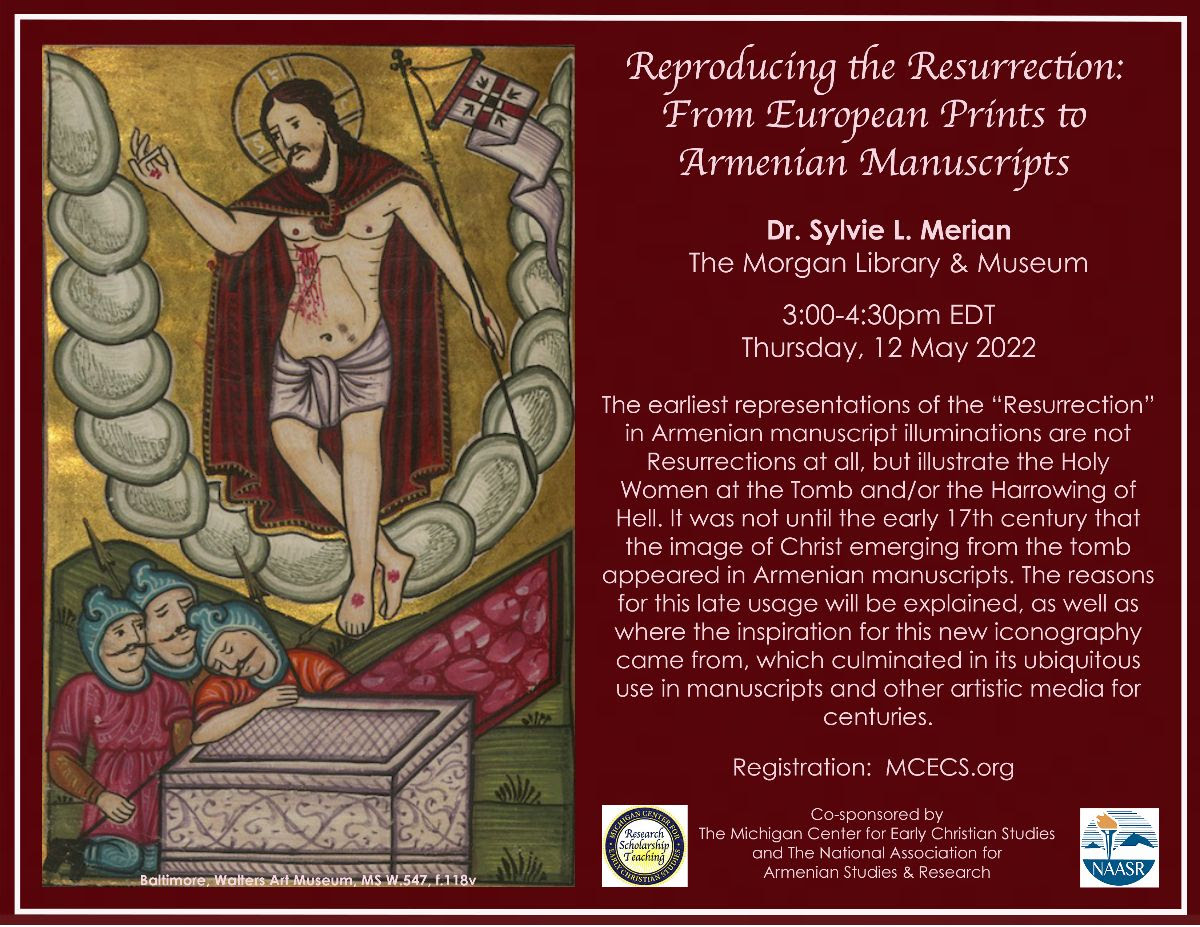 The Michigan Center for Early Christian Studies and the National Association for Armenian Studies and Research are presenting a talk by Dr. Sylvie Merian via Zoom from 3:00-4:30 PM Eastern Daylight Time on 12 May, 2022. The presentation, titled “Reproducing the Resurrection: From European Prints to Armenian Manuscripts,” will focus upon the rich Armenian art tradition. The earliest representations of the “Resurrection” in Armenian manuscript illuminations are not Resurrections at all, but illustrate the Holy Women at the Tomb and/or the Harrowing of Hell. It was not until the early 17th century that the image of Christ emerging from the tomb appeared in Armenian manuscripts. The reasons for this late usage will be explained, as well as where the inspiration for this new iconography came from, which culminated in its ubiquitous use in manuscripts and other artistic media for centuries. The registration and event are free. Register in advance here: https://tinyurl.com/2k32pkzp

Copyright © 2022 The Enoch Seminar, All rights reserved. Find us on the web at enochseminar.org

THE NETWORK FOR THE STUDY OF ESOTERICISM IN ANTIQUITY

Our website provides resources and information for students and specialists of ancient esoteric thought, history, and literature.